Sherlock Holmes on Screen: “The Sound Which a Mouse Makes” (NAVA)

Sometimes, I worry that I’m beginning to take myself too seriously.  It wouldn’t be hard, considering that I spend most of my time enshrouded in fog, in unsavory locales, usually in the dead of night; and following around characters that spend most of their time investigating crimes that are, at best, gut-wrenching, or, at worst, gruesome and violent.  That’s not to say that the stories in the canon are all seriousness.  “The Blue Carbuncle” is famously lighthearted; for all that it is a Christmas story, and literally a wild-goose-chase.  And in “The Noble Bachelor,” when Holmes describes the vanishing of Lady St. Simon, “This is more interesting than it promised to be; quite dramatic, in fact”; Watson responds pithily: “Yes; it struck me as being a little out of the common.”
But when I find myself irritable, hostile, and a hair’s breadth away from snapping at my husband to put down my copy of William Baring-Gould’s Sherlock Holmes of Baker Street because doesn’t he know the spine is about to fall apart and all my notes are written in the margins of that edition and he should remember how important that book is and if he doesn’t put it back on the shelf where he found it right this minute because I have a system…
…well.  Let’s just say that I occasionally find myself in need of a reminder that hobbies are supposed to be soothing, and not bring about symptoms that I suspect may be similar to the onset of a stroke.  When that happens, there are some films which I sometimes liken to the cinematic equivalent of a cup of tea and a biscuit, and oddly enough, two of them involve mice.
·         The Great Mouse Detective (1986); Starring Barrie Ingham and Val Bettin 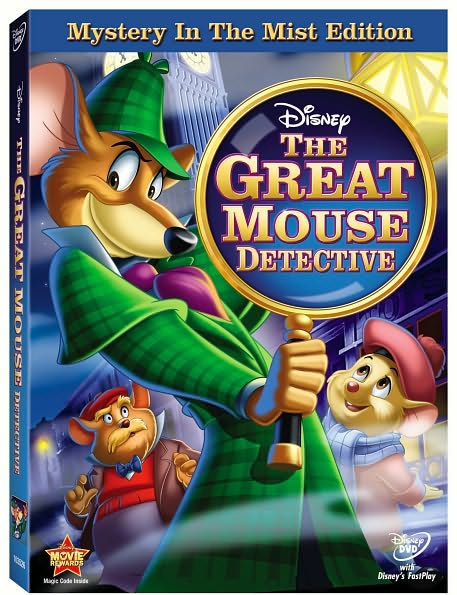 Based on a series of children’s books by Eve Titus, the titular character, “Basil of Baker Street,” lives in a mousehole beneath 221B, known as 221 (and one half) Baker Street.  He shares the residence with his landlady, “Mrs. Judson,” and eventually, “Dr. David Q. Dawson,” who has just returned to London after his service in Afghanistan.  Titus named her mouse detective after the legendary Basil Rathbone, star of fourteen Sherlock Holmes films, though it’s worth mentioning that Sherlock Holmes was known to occasionally don the guise of a sea captain, whom Holmes referred to as “Captain Basil.” [For more, see: “The Adventure of Black Peter.”]
For their part, Sherlock Holmes and Dr. Watson only appear in the film as shadows on the wall, and as disembodied voices (and violins) from off-screen.  Rathbone himself voices Holmes in a clip taken from a recording of “The Red-Headed League,” saying: “I observe that there is a good deal of German music on the programme…It is introspective, and I want to introspect.”  Obviously, Basil is quite like his human counterpart—he is unbearably untidy, susceptible to erratic and dangerous gunplay, adept at disguise, and possessed of an archenemy that he refers to as “the Napoleon of Crime”—Professor Ratigan.  He is capable of black moods and fits of boredom.  From 221B, he borrows a bloodhound named “Toby,” presumably the same hound that Old Sherman lends to Dr. Watson in “The Sign of Four.”  He seems unable (or unwilling) to learn his client’s name.  Basil is even an accomplished chemist.
Dr. Dawson is shades of Nigel Bruce’s portrayal of John Watson—a little bumbling, a little foolish, but earnest and sincere, and largely unsure of his new friend’s behavior.  Dawson becomes moony-eyed and blushing over a pretty dancing girl, and drinks unthinkingly from a glass, the contents of which later turn out to be drugged.  At the same time, he responds with military precision to Basil’s orders, and is heartbroken when it seems that he is responsible for the loss of their young client.
But for all their similarities to the Master Detective and his Doctor, Basil and Dawson are still just mice, and cartoon mice, at that.  Toby is not just a tracking animal; he is also a method of conveyance for the tiny little creatures.  During a fight scene in a toy store, Basil finds himself tangled in the pull-string of a talking doll, and bounced up and down like a yo-yo.  Dawson rides in the space beneath carriages (while what appears to be the shadowy silhouette of Dr. Watson rides above).  Mrs. Judson keeps her tenants well-supplied with cheese crumpets.  And one of the most imminent threats of danger is a large, fluffy cat with an indiscriminate appetite.
According to Films and Filming magazine: “The approach to the mousehole at 221B Baker Street, which duplicates life in the famous apartments upstairs, with Doctor Dawson explaining his recent history and service in Afghanistan to the bereft Olivia Flaversham, is more affecting than… set pieces disproportionately filled with gloating violence” (Davies 140).  Basil’s and Dawson’s lives below Baker Street indeed duplicate and parody the lives of the men living above them, but they never interact.  Basil is a detective in his own right, but it’s hard not to imagine what would happen if the Great Mouse Detective was able to sit (literally) on the shoulder of Sherlock Holmes.
·         Tom and Jerry Meet Sherlock Holmes (2010); Starring Michael York and John Rhys-Davies 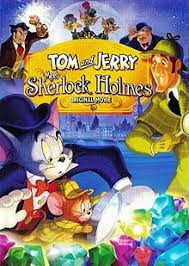 Unlike The Great Mouse Detective, where Sherlock Holmes and Dr. Watson are relegated to the background and give up the spotlight to their mouse counterparts, the Detective and Doctor share the spotlight with the famous Tom and Jerry.  Jerry, living in a mousehole in the wall of 221B, first appears on screen as  Holmes's tiny lab assistant, and Tom, a messenger, seems to get corralled into the mystery by mere chance (and his omnipresent need to catch Jerry).  During the film, Tom and Jerry try to emulate the methods of Holmes and Watson, largely without success (though Jerry looks remarkably dapper in a tiny deerstalker and Inverness); they seem to fail at every turn and cannot even get their client to safety.  In fact, they lead her right into the heart of danger, appropriate hijinks ensuing, of course.  For their part, Holmes and Watson don’t fare much better, at first, and are off literally chasing geese in the countryside.
﻿

In classic fashion, the cat and mouse team are chased, pummeled, harassed, and pushed into a variety of unsafe situations, including (but not limited to) the pipes of a church organ.  At one early point, Jerry is pressed into the size and shape of a coin, while trying to fetch a newspaper for Holmes (and the newspaper itself is reduced to mere scrap before it reaches Baker Street).  Holmes seems to take it all in with an uncharacteristic, if a bit put-upon, aplomb.  He perches Jerry on his shoulder during investigations, and listens thoughtfully to any tiny clues the mouse might find.
But Sherlockians will probably enjoy the more subtle jokes even more—the ones placed throughout the movie for seemingly no one’s enjoyment but our own.  Dr. Watson races into Baker Street from the “Rathbone” public house to tell Holmes about a new case.  Holmes and Watson (and Tom and Jerry) meet their client at the “Bruce Nigel” Music Hall.  Holmes finds a button that leads him to “Brett Jeremy,” the tailor.  It’s the sly nudges and winks and “I-see-what-you-did there’s” that make this movie so enjoyable.  It’s not remarkably sophisticated humor; the plot is not complex.  A straight-to-DVD film is hardly ever elegant, or layered, but this one seems to keenly understand its demographic, knows the right buttons to push, recognizes what the audience wants to see, and to what they will respond.
~~~
I spend a lot of time researching and obsessing over (to the point of clinical neurosis) names, dates, and the position of slippers and jackknives in the Sherlock Holmes canon.  I’ve given hours of my life to the pages of books, and the details and minutiae that they contain.  I’ve thought long and hard about the name of Sherlock Holmes’s father, John Watson’s mother, and Mrs. Hudson’s missing husband.  I’ve dreamt of red-headed men, veiled lodgers, and spectral hounds.  And every moment has been wonderfully worthwhile.  But sometimes, I wonder if every Sherlockian should just take a minute to sit back, have some tea, and watch a mouse in a tiny hat ride a dog.  If we all take a minute to laugh at ourselves, then it’s easier to remember why we love the things we love.
And maybe my poor husband won’t risk losing a hand the next time he reaches for my bookshelf.
oOo
There’s one week left to enter the current blog contest!  Brush off your knowledge of Sherlock Holmes trivia and win a prize package of reference works.  Entries are being accepted until May 21.
Other sources used in this post include Starring Sherlock Holmes: A Century of the Master Detective on Screen (2007 Edition), by David Stuart Davies.
Posted by goddessinsepia at 10:15 AM