“Another of Colonel Huggins' interests was riding, an enthusiasm also embraced by Jeremy. As a child, Jeremy had a pony named ‘Babs’ whom he trained to climb stairs. Jeremy actually rode Babs into the Grange, which didn't sit well with Nanny Clifford, especially when it came to the inevitable by-products of Jeremy's four-legged, unhousebroken guest. (Nanny wasn't too pleased when Jeremy rode a donkey up into his room, either – the donkey had no trouble going upstairs, but balked on the way down.) Jeremy took riding lessons and competed in gymkhanas (equestrian field days consisting of exhibitions of horsemanship and pageantry). Although Jeremy decided at an early age that he wanted to become an actor, he once said that he wished he could have been a jockey, too. (He probably enjoyed filming the Holmes story ‘Silver Blaze’.)” (Lisa Oldham, The Brettish Empire) 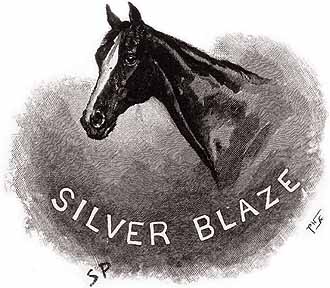 “My ignorance cries aloud to heaven,” wrote Sir Arthur Conan Doyle about “Silver Blaze,” a short story appearing in The Memoirs of Sherlock Holmes. “I read an excellent and very damaging criticism of the story in some sporting paper, written clearly by a man who did know, in which he explained the exact penalties which would come upon everyone concerned if they had acted as I described. Half would have been in jail, and the other half warned off the turf forever.” And the 1988 adaptation of “Silver Blaze” by Granada Television certainly included its own share of mistakes. The episode famously exceeded its allotted budget due to its need for an on-location shoot, and the large number of horses and human extras needed for the race scenes. The episode was preceded by Granada’s rendering of “The Devil’s Foot,” another episode that had required an expensive on-location shoot. This confluence of factors meant that by the time Granada was ready to produce their adaptation of “The Hound of the Baskervilles,” the series’ budget was already seriously compromised, and the fate of the HOUN adaptation with it (Davies 139). There are many arguable reasons as to why Granada’s HOUN failed when it had every expectation of success – not the least of these being that because of the DEVI and SILV adaptations, producer Michael Cox simply could not afford to construct the HOUN film that he had envisioned.

But its role in the failure of the HOUN adaptation does not necessarily mean that the production of SILV was not a success in its own right. The episode’s location, expensive as it must have been, is atmospheric in a way that a sound stage or even a cleverly set-dressed local field could never be.  The vast and unforgiving loneliness of the fields of Wales, Cheshire and Lancashire in the north of England are desolate and forbidding in the way that the moorlands of Dartmoor must certainly be. The stables of King’s Pyland appear as a mere dot on the landscape as Sherlock Holmes (Jeremy Brett) and Dr. Watson (Edward Hardwicke) travel in with Colonel Ross (Peter Barkworth). The neighboring stable of Backwater is miles away and likewise the odds of finding the missing Silver Blaze seem remote in the extreme. It is the expansiveness of the landscape that impresses upon the viewer the enormity of the Detective’s task. A horse lost on the sprawling moor – even a racehorse as extraordinary as Silver Blaze – will be as difficult to locate as a black cat in a coal cellar. “I expect a miracle from you, Mr. Holmes,” says Colonel Ross. The atmosphere created in the episode (of which the landscape plays no small part) is a testament to the extent of the miracle that was produced.

And in regards to those costly horses and extras that seem to adorn every scene in SILV? The presence of more horses makes the absence of Silver Blaze even more profound and even more significant. King’s Pyland appears to be positively brimming with horses – why is the missing one so important? It is clear that none of the other horses can match Silver Blaze in strength, speed or skill – and the horse in question is not even present for the comparison! Bayard, the only other horse mentioned as being remotely in the same league as Silver Blaze, is admitted by Colonel Ross as just “intended for a pacemaker.” Indeed, Colonel Ross seems to be going to great lengths to reacquire Silver Blaze – even calling on Sherlock Holmes against his better judgment. The identity of the murderer of John Straker, Silver Blaze’s trainer, feels almost secondary to locating the missing horse. Sherlock Holmes even goes so far as to chide Colonel Ross for his neglect. He asks Colonel Ross, “[The location of Silver Blaze] is a minor point, of course, compared with the question of who killed John Straker?”

As for the extra cast members – what is a dramatic reveal without a crowd of people to witness it? When Holmes theatrically reveals the identity of Straker’s killer (who was Silver Blaze, of course, acting in self-defense), it is in the Winner’s Circle of the Wessex Cup, surrounded by a large crowd of well-wishers. As the realization dawns on Colonel Ross that he has been horribly deceived by a man that he trusted implicitly, the slowly encroaching crowd makes his error in judgment seem palpable. For a moment the man seems surrounded by his mistakes – rather than by onlookers – unable to escape them. But perhaps even more simply: what is a story about a racehorse without other horses to race against, and people to watch the race?

The episode also lends the necessary weight and grandeur to one of the most vaunted and recognizable canonical lines. But before Jeremy Brett’s Sherlock Holmes ever speaks a word about the infamous “dog in the nighttime” (the one who did nothing, of course), there is a scene in which he enters the missing racehorse’s stable and is subjected to the snarling and vicious barks of the resident canine. There is a pause, a moment of utter stillness, marked by nothing more than the subtle upward curve of Brett’s mouth. This is not the frenetic silence of a man frozen in terror by the unexpected onslaught of an unruly dog, hoping to avoid injury. This is a moment of intensity and gravitas, as understood by a man for whom the moment of knowing supersedes all other factors and distractions.

There is quite a lot that is tangible about Granada’s adaptation of SILV – moments that are so significant and weighted that the viewer can seemingly reach out and touch them. Holmes reaching out to gently touch the hand of a distraught maid as she recounts finding John Staker’s corpse. Holmes reaching barehanded into the muddy landscape to retrieve a hidden nail. Sherlock Holmes, Dr. Watson, and Inspector Gregory (Malcom Storry) passing around a cataract knife as if it were some precious artifact. The Great Detective hanging his cane on the door of the stable with a significant look and gesture, just before he washes the black paint from a horse, only to reveal the animal beneath as the missing Silver Blaze. Holmes grinning and snickering as he collects his winnings after the Wessex Cup race (one of those moments of Sir Arthur Conan Doyle’s “ignorance” that mentioned earlier). Finally, Holmes reaching out to stop an annoying ringing dinner bell with his hand, as he recounts the solution of the case to Colonel Ross and Dr. Watson.

The viewers of Granada’s Sherlock Holmes series can wistfully speculate what would have become of their adaptation of HOUN had budgetary mistakes not been made in the production of DEVIL and SILV. Even Jeremy Brett was known of having wished that they could go back and re-film that episode (Davies 144). But speculation is a fruitless endeavor, changing nothing. And it distracts from the fact the Granada’s SILV episode is outstanding and artfully constructed in its own right, with unforgettable moments that linger after the episode ends – which leave an indelible impression on the screen.

“Better Holmes & Gardens” now has its own Facebook page.  Join by “Liking” the page here, and receive all the latest updates, news, and Sherlockian tidbits.
Posted by goddessinsepia at 7:12 AM