“Only Those Things the Heart Believes Are True”: Subjective Reality and Belief in Sherlock Holmes

“Good old Watson! You are the one fixed point in a changing age. There's an east wind coming all the same, such a wind as never blew on England yet. It will be cold and bitter, Watson, and a good many of us may wither before its blast. But it's God's own wind none the less, and a cleaner, better, stronger land will lie in the sunshine when the storm has cleared.” (His Last Bow/ "Sherlock Holmes and the Voice of Terror") 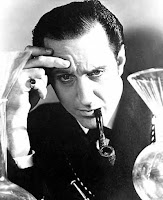 My husband prefers Basil Rathbone as Sherlock Holmes.  I’m never quite sure what to make of it when someone who has no opinion anything else related to Sherlock Holmes, will have a very specific opinion about who portrays the Great Detective on screen.  Maybe someday I’ll tell the story of my mother-in-law’s…um…ardent admiration for Peter Cushing’s portrayal, which I think stems in no small way from a school-girl crush.
Anyway, my husband prefers Basil Rathbone, and that’s as far as his interest in Sherlockian matters goes, but he is also quite firm on this point.  He thinks Robert Downey, Jr., is “scruffy,” describes Benedict Cumberbatch as “cold,” and mutters a word under his breath that I am positive is “histrionic” when I take my Jeremy Brett box-set off the shelf.  But when I reach for my Rathbone collection, he actually joins me on the sofa, and does not attempt to hide the remote under the cushions.  And that’s enough for me.

﻿﻿﻿﻿﻿And that’s also the reason I’ve never pressed the issue of why, as it is enough that he does, in fact, enjoy them...genuinely, and not just for my benefit.  However, as this week marks the 116th birthday of Nigel Bruce, I decided to question him a little more on the issue.  He didn’t really see the point of it all at first, but he gave it some thought, before finally telling me: “I like that some of them are during the War.  I like the idea of Holmes fighting for his country.  I like the idea of Sherlock Holmes as a war hero.”


Ah, I thought.  There we are.  It should have been obvious.  My husband is one of those people who can recognize a plane, ship, gun, or tank from the shape of its shadow, and has been able to do so since he was a toddler.  Of course the war would be the selling point for him.

I’ve actually been thinking a lot about Sherlock Holmes and the Second World War since I started reading Michael Chabon’s “P.S. The Final Solution: A Story of Detection,” in which Holmes (technically, the main character is an unnamed “old man” who was once a famous detective and now lives in the South Downs… but you can do the math yourself) is 89 years old.  This is more in line with what is thought to be the traditional timeline of Holmes’s life, and contrary to the Rathbone-Holmes movies, in which the world of Sherlock Holmes (characters, plots, and settings) is transplanted entirely into the 1940s.
Rathbone made his first two Sherlock Holmes films with Twentieth Century Fox, but it was only after the franchise was moved to Universal Studios that they began to be used for anti-war propaganda.  In addition, the first three films with Universal Studios—“Sherlock Holmes and the Voice of Terror”, “Sherlock Holmes and the Secret Weapon”, and Sherlock Holmes in Washington”—had very explicit anti-Nazi-themes.  And at the end of each film, a card encouraging the audience to buy war bonds was shown.
Most interesting, I think, is the title card from those films, which read:
Sherlock Holmes, the immortal character of fiction created by Sir Arthur Conan Doyle, is ageless, invincible and unchanging. In solving significant problems of the present day he remains as ever the supreme master of deductive reasoning.
And I think that’s the core of the issue.  That Sherlock Holmes, at the very heart of it, remains of the same.  I know I’m not saying anything new here, but I think it bears repeating.  In fact, there are hundreds of examples of this point, but these are some good ones—Basil Rathbone and Michael Chabon.  The outside of the man might change—he might be unnamed and so old that his joints make alarming noises when he bends, transplanted to the 1940s to fight Nazis, or, most recently, even equipped with a smartphone in the 21st century—but the soul of the thing should remain the same.  The case should be solved, the day should be saved, and the world gets to spin on once more because of a man who, as Graham Moore puts it in The Sherlockian, “…can tell you the story of your life by the cut of your shirtsleeves.”

And perhaps that’s why Sherlock Holmes was so easily appropriated as propaganda …because the audiences wanted to believe (and still want to believe) that what the man said was, absolutely and without question, true.  We want his solutions to be unerringly accurate, his motives and morals (if not his methods) to be unimpeachably right.  Lucy Pollard-Gott, in her book, The Fictional 100, states that, “More than any other modern character, Sherlock Holmes has been accorded the distinction of becoming real (44).”  When it comes to real people, we want to believe certain things of them—good or bad—but we want to believe in them unfailingly.  That’s the heart of the matter—that certain things are incontrovertible.
My husband wants to believe that Holmes is a war hero.  Michael Chabon wants to believe that Holmes can solve crimes when he’s practically a century old.  And I want to believe in all of it.  I don’t think there is anything terrible about that.  It’s even a little appallingly romantic.
And as Pollard-Gott says, “Sherlock Holmes continues to attract us, assuredly for the quality of his mind, but also for the quality of his enigmatic heart.  Holmes lives because we still need him (51).”


oOo
More information about Lucy Pollard-Gott and her book can be found on her website: http://www.fictional100.com/.
Posted by goddessinsepia at 7:35 AM