Like many Sherlock Holmes devotees, my bookcases are overwhelmed, with bowed and cracked shelves.  My husband lives in fear of the seemingly inevitable crash.  The amount of material dedicated to analyzing, chronicling, debating, and researching every (sometimes seemingly insignificant) detail of the world's favorite detective is endless.  But Alistair Duncan's first book, Eliminate the Impossible, is not just another member of an already very large wolf pack.  Approaching his discussion of the world of Sherlock Holmes both on the page (through the original canon) and on screen (both film and television), Duncan immediately sets his work apart from the myriad others that would overshadow it through his concise language, keen insight, and immense body of scholarship.

The first portion of the book, devoted to the original stories, offers a neatly organized chronology of Doyle's work, with crisp summaries, and intriguing observations.  Duncan distills the theories of well-known Sherlockian scholars (Dakin, Baring-Gould, and Klinger) and presents the information in a way that sheds new light on some of the stories more perplexing problems, while still making the information accessible and readable to new Sherlockian researchers.  Having the opinions of many noted scholars on one page is also endlessly useful.
Unfortunately, there is something missing from this section of Duncan's book, and that is, ironically, Duncan himself.  He devotes large portions of his book to the theories and opinions of others, but his own theories are, for the most part, markedly absent.  On a few occasions does he make note that the theory of a particular scholar is not his own or that he disagrees with a particular opinion, and only rarely does he enlighten the reader as to what his theory may be.

But it’s the second portion of his book that really showcases Duncan’s strengths.  His analysis of the various portrayals of Sherlock Holmes on screen is both delightful and surprising, as I referenced in a recent post on Richard Roxburgh and Rupert Everett’s portrayals of Sherlock Holmes.  While Duncan spends well-deserved time on many of the better known actors that have portrayed the Great Detective (Basil Rathbone and Jeremy Brett), he also sheds much-needed light on some forgotten gems (Douglas Wilmer), and also on some film portrayals that are perhaps best left forgotten (Matt Frewer, I'm looking at you).

Surprisingly missing is a review of the Russian Sherlock Holmes, Vasily Livanov and his Watson, Vitaly Solomin.  Additionally, when I finished my first reading of this book over a year ago, I closed it and hoped one day for a second edition, which would include, amongst other things, a look at Robert Downey, Jr., and Jude Law's 2009 outing as Holmes and the Doctor.  Today, I still hope for a second edition, one that might include Benedict Cumberbatch and Martin Freeman’s 21st century take, amongst other items.  Duncan has discussed the possibility of a second edition on his blog, and I’ll keep my fingers crossed.

In short, when many Sherlock Holmes scholars are picky about what to put on their already overloaded shelves, Alistair Duncan's book has more than earned a place on them.  His multi-faceted approach and thorough research make his first work invaluable, and one that will certainly be well-thumbed for many years to come.
·     Close to Holmes: A Look at the Connections Between Historical London, Sherlock Holmes and Sir Arthur Conan Doyle
(Publisher: MX Publishing; February 1, 2009)
An Indispensible Traveling Companion

I’m not so very old, but it’s been a depressingly long time since I’ve been to London.  And when I read Alistair Duncan's second Sherlockian outing Close to Holmes, nothing impressed me more than the feeling that I really could have used this book while there.  I finished the book with the sense that I had missed much the last time I had walked through London unguided, and that if Duncan’s book had been in my bag, it would have been equivalent to a personal guided tour.
Duncan methodically and efficiently highlights both locations that are obvious stops for any Sherlock Holmes enthusiast (Baker Street being the first of these), and those that would be a great surprise (the real-life model for Pondicherry Lodge), in addition to the locations frequented and occupied by Sir Arthur Conan Doyle himself.
But Duncan does more than describe these streets and buildings—something any well-researched history text could do.  He gives them context, a sense of time and place, that is utterly invaluable. The reader walks away from the book with a knowledge of these locations within history, but also within the Sherlock Holmes canon.  As you read, restaurants come to life with the buzz of humanity, streets with the movement of traffic, and buildings and homes with the mysteries within their walls.  It is one thing to describe the sights and sounds of Victorian London to the reader, but Alistair Duncan manages to bring them back to life, and that is quite another thing entirely.
So, if I ever do have the opportunity to walk the streets of London again, it will most definitely be with Alistair Duncan's book in hand, and I cannot think of a stronger recommendation than that.
·       The Norwood Author: Arthur Conan Doyle and the Norwood Years (1891-1894)
(Publisher: MX Publishing; March 1, 2010)
A Uniquely Driven and Keenly Focused Literary Biography 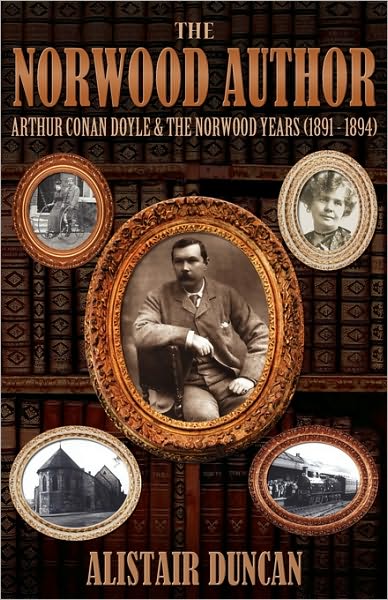 I’m usually a hard sell on a biography; they can be very tricky things.  It's difficult to write a compelling one—one where the reader doesn't walk away feeling like they heard the information before; that what they just read wasn't repackaged and repurposed from some other source.  And when your subject is one of the most intriguing literary figures that has ever lived, who created one of the world’s most enduring fictional characters, a writer’s task only multiplies in difficulty.
So I can think of no higher compliment that I can pay to Alistair Duncan's Sir Arthur Conan Doyle biography, The Norwood Author, than to say that I learned something.  Duncan presents his reader with new and fresh information, and draws parallels to what is already widely known about the man who created the Great Detective.  By focusing on a specific period of Sir Arthur Conan Doyle's life (1891-1894), Duncan is able to focus on information that might be glazed over, or even completely neglected, in a more extensive biography.  Duncan shows an appreciation for all the minutiae that another biographer might see as mere trifle, and he understands that a picture of a Doyle is only formed by knowing all the parts, and that neglecting even one piece is an unnecessary oversight.  And, as a result, the picture of Conan Doyle's life grows a little clearer, a little crisper around the edges, a little more complete.

~~~
Fans of Sherlock Holmes know, more than anything, that the devil is in the details, and Alistair Duncan's Doyle biography is full of gems.  Details that shaped Sir Arthur Conan Doyle's life, writing, and the famous character that so many people love, are available in abundance, for those willing to seek them out.
oOo 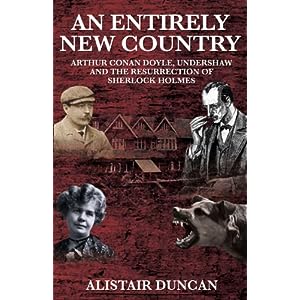 All three of Duncan’s books are available in both Kindle and paperback formats, on Amazon.com and Amazon.co.uk.  Follow his blog for more information about his upcoming book on Sir Arthur Conan Doyle and his time at Undershaw: An Entirely New Country –Arthur Conan Doyle, Undershaw and the Resurrection of Sherlock Holmes¸ scheduled to be released this December.  You can also follow him on Twitter.
Posted by goddessinsepia at 5:21 AM