"I should very much like to ask you one or two plain questions to which I beg that you will give a plain answer” (TWIS).
﻿Most people have a hobby, I think, and that usually provokes a certain amount of curiosity from those closest to them.  My husband, for instance, has been studying military history all of his life, and so there is always a little discussion regarding accuracy and continuity whenever The Guns of Navarone is on Turner Classic Movies.  My little sister is very interested in all genres of heavy metal music (I didn’t even know there was more than one genre until she told me), about which I try to ask thoughtful questions, while simultaneously covering my ears, as very angry men scream at me from her stereo.  I have friends who run, friends who bike, friends who knit, friends who collect tiny spoons from around the world, friends who love Oz, and friends who spend most of their time in Wonderland.  I always try to ask thoughtful questions of varying specificity, if only to show that I care about these things simply because they do.  And they do the same for me.
So, what types of questions do you get asked if your hobby is a literary nineteenth century detective, his doctor companion, and all things related to their world?  I’ve found that the questions range from the mostly general (Which story should I read first?) to the oddly specific (Did Sherlock Holmes ever investigate a case in my hometown?) to more loaded than they were probably imagining (Was Sherlock Holmes real?).  Occasionally, the questions can irritate, like the proverbial pea under the mattress (What’s the deal with that stupid hat and silly pipe?), but I’ve found that the really good questions, the truly thoughtful ones, tend to inspire.  They get me thinking, they start me on new research, and most importantly, they’re questions I want to share.  I’ve listed a (very) few of my favorites below, and I hope you’ll supply your own for discussion in future installments.

·         Who lives in 221A Baker Street?
Oh, poor Mrs. Hudson.  After all she does for the tenants of Baker Street—cooking, cleaning, laundry, making tea, delivering telegrams and other correspondence, ushering and comforting clients (mindless of the time of day or night)— people seem to forget that she needed somewhere to sleep as much as her residents.  She was certainly more than a landlady (noting that the term “housekeeper” seems to sit ill with Mrs. Hudson’s 21st century counterpart, though she appears to conduct many of the same tasks as her 19th century forebear).  In fact, according to Christopher Redmond, author of the Sherlock Holmes Handbook (2nd Edition), Mrs. Hudson’s unusual devotion to her tenants—particularly Holmes—is worth noting.  “Certainly the kind of devotion seen in ‘The Empty House,’ in which she repeatedly crawls to Holmes’s wax bust ‘on my knees’ and in danger of her life to adjust its position, suggests something more than the usual relationship between tenant and landlady” (54).
In all likelihood, as the owner of the residence, Mrs. Hudson would have retained the usage of the ground floor as her personal apartments, while Holmes and Watson would have taken up residence on the top two levels (Day 8).  Thus, Mrs. Hudson is the most likely resident of “221A” Baker Street, though her apartments probably never bore that official designation.  Also of note, in her book Talking About Detective Fiction, P.D. James posits the existence of a “221C” Baker Street, though I think this unlikely (37).  Primarily because a neighbor in such close proximity to Holmes and Watson would have been mentioned eventually in the canon, and also because I’ve had some monstrously bad neighbors in my life, but one who shot through our adjoining walls would be beyond most human endurance.
·    Why isn’t Sherlock Holmes a police officer, or otherwise working full-time for Scotland Yard?
“I am not retained by the police force to supply their deficiencies,” Sherlock Holmes says in “The Blue Carbuncle”—a statement which goes quite a ways toward explaining his feelings about the “official” police force.  But it is more than just a matter of ego or a condescending disregard for the abilities of the Yarders that surround him.  If it were simply a matter of feeling above the rest of the detective force, surely Sherlock Holmes could have risen to the top of the company, with little effort, and made an easy career for himself.  At the very least, he would not have been the first man to be a “big fish in a small pond,” as it were.  But a position within Scotland Yard wasn’t the only potential job at issue.  With a brother like Mycroft, who is described in “The Bruce-Partington Plans” as occasionally being the whole of the British government, it would probably be a matter of small consequence for Sherlock Holmes to find himself in government service, in intelligence or similar activity.  Indeed, he does spend a brief period prior to the First World War masquerading as the spy “Altamont,” whom we meet in “His Last Bow.”  But he never takes an official, permanent position, and Watson tells us that Holmes even turned down knighthood (3GAR).  Holmes didn’t seem to want to be tied to any master, only himself.
Holmes tells Watson in The Sign of Four, “The work itself, the pleasure of finding a field for my particular powers, is my highest reward.”  Being a consulting detective was Holmes’s career, but it was not his job.  There are many people who I am sure can appreciate the difference.  Holmes made money by using his “particular powers,” but he never sought to become rich through his work.  He even told Neil Gibson, a wealthy American client, “My professional charges are upon a fixed scale…I do not vary them, save when I remit them altogether” (THOR).  (Whether or not he was eventually a wealthy man, despite his indifference, is another matter.)  A task loses a certain amount of enjoyment when it becomes something you have to do, and not something you want to do, no matter how talented or successful you may be in your position.  Joining the police force or taking a government position would have made detection a job, and Holmes was clearly loathe to lose his ability to do what made him unique, and to find pleasure in the task, no matter how difficult.
·     Why on earth would any parent named his child, “Sherlock”?
Well, with an older brother named “Mycroft” and, if William Baring-Gould is to be believed, another older brother named “Sherrinford,” I’m occasionally of the opinion that the Holmes parents were probably possessed of an appalling sense of humor.  The name “Sherlock” means “with cropped hair,” or more popularly, “fair haired,” which is a particularly ironic descriptor as the Great Detective is typically depicted as having dark, usually black, hair.  Renowned Sherlock Holmes scholar William Baring-Gould, in his biography, Sherlock Holmes of Baker Street, actually gave the Great Detective the full name of “William Sherlock Scott Holmes,” in addition to a number of other intriguing biographical items regarding Holmes’s early life.  The addition of an extended full name for Holmes is curious.  Going as “Sherlock” despite having a first name of “William,” indicates a preference, on some level, for the name “Sherlock.”  But throughout the canon, the only person who calls Holmes by that name is his brother.  Even his closest friend of nearly fifty years never refers to him as anything except “Holmes,” which seems to indicate that he somehow finds the name “Sherlock” repellant.  Pulling on either thread, it seems, creates a whole new row of loose ends. 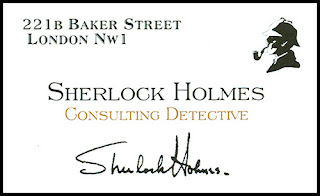 Even the cringe-inducing 2010 “mockbuster” entitled simply, “Sherlock Holmes,” makes light of this subject.  At the end of the film, Watson (played by Gareth David-Lloyd) asks Holmes (played by Ben Syder) why the villain kept referring to Holmes as “Robert.”  Holmes reveals that his full name is “Robert Sherlock Holmes,” and that he goes by Sherlock because, “Whoever heard of a detective named Robert?”
~~~
As I said earlier, I’ve listened to a lot of questions about Sherlock Holmes, and these are only a very few of my favorites.  Some make me smile, most make me think, and there are many I couldn’t even begin to answer.  “Only a fool knows everything.  A wise man knows how little he knows,” as the saying goes.  Feel free to share the questions you have been asked or may have asked yourself, either in the comments or via e-mail at betterholmesandgardens[at]gmail[dot]com, for discussion in future installments.
oOo
Less than two weeks until the new blog contest!  Brush up on your Sherlock Holmes trivia, and check back here on April 25 for details on how to enter and win.
Other sources used in the post include: Sherlock Holmes: In His Own Words and in the Words of Those Who Knew Him, by Barry Day (Taylor Trade Publishing, July 2003).

Posted by goddessinsepia at 5:34 AM