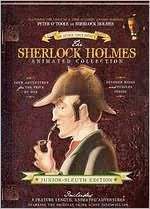 A favorite Sherlock Holmes film, like any beloved thing, should feel comfortable, yet familiar.  For many Sherlockians, their favorite on-screen Holmes and Watson is soothing, consoling on even the worst of days.  Moreover, an animated feature, as has been discussed in a previous post, can provide an additional sense of whimsy and childlike nostalgia that can also be cheering.  But the line between “soothing” and “sleepy” is a fine one and quite easy to cross.  Unfortunately, I only discovered this notion after my husband found me dozing, sprawled across our sofa, with the remote hanging limply from my hand.  The film that was scrolling, unseen, on our television screen was a volume from the 1983 “Sherlock Holmes Animated Collection,” and my husband was, frankly, appalled at the sight.
He had never seen me fall asleep during a Sherlock Holmes film before, and he was more unsettled than I thought was honestly necessarily.  “I don’t understand,” he said, staring at me pointedly.  “Explain this to me again.  You told me they were good movies.  You told me you liked them.  That they were ‘fantastically faithful.’”  Still half-asleep and grumpy, I lifted an eyebrow, while wondering why he seemed to be taking my little nap as a personal offense to our marriage.  “They are good movies,” I snapped.  “It’s just that there is something about Peter O’Toole’s voice.  It’s so… lethargic.”  In fact, to call Peter O’Toole’s performance as the Great Detective “sluggish,” would not be inaccurate.  According David Stuart Davies, author of Starring Sherlock Holmes: A Century of the Master Detective on Screen:
“The most surprising aspect of these tame and somewhat insipid cartoons is the performance of the star: even when the drawn image moves and gestures in a dramatic fashion, O’Toole’s rather somnambulistic tones do not vary their pitch or rhythm.  It has been suggested that the actor recorded the dialogue for all four films in one day; whatever the reason, Peter O’Toole failed to impress as the voice of the Great Detective” (119).
“The Sherlock Holmes Animated Collection” is comprised of four remarkably detailed adaptations of A Study in Scarlet, The Sign of Four, The Hound of the Baskervilles (inexplicably retitled in the collection as “The Baskerville Curse”), and The Valley of Fear.  The animated format lends itself especially well to the long flashback sequences that appear in every novel, with the exception of HOUN.  The audience is taken to Salt Lake City in STUD, to India in SIGN, and to Chicago and Vermissa Valley in VALL.  Although these flashbacks are often remarked upon as unnecessary or even strange plot deviations in the original text, they are a part of the stories as Sir Arthur Conan Doyle presented them, and so it is refreshing to see a collection of films in which those aspects are fully represented.  In addition, the mere inclusion of an interpretation of VALL is noteworthy in and of itself, as VALL often appears to be the least adapted of all the Sherlock Holmes novels.  Previously, the last notable adaptation was Arthur Wontner’s “The Triumph of Sherlock Holmes” in 1935.
However, the animated series does include some strange and off-putting omissions.   The adaptation of STUD does not include that ever elusive “introduction scene,” which so many adaptations of the novel seem to avoid, and personally, I had been quite hopeful to find in the collection.  Holmes and Watson begin the film firmly ensconced in their partnership and their Baker Street residence, with Holmes complaining drearily about the dullness of crime and shooting bullet holes in the walls.  This is particularly frustrating as an animated film appears to be an ideal venue to show Holmes’s and Watson’s first meeting, even if only in the form of a flashback.  Animators do not have to worry about the age of their actors, and whether or not they can play both young men and their older counterparts.  Live action Sherlock Holmes films offer some logistical challenges in the way of casting, and accurate representation of age.  But it would have been no difficulty to animate Holmes as a young chemist, shaking Dr. Watson’s hand and saying, “How are you?  You have been in Afghanistan I perceive” (even if it was in Peter O’Toole's sonorous tones).

Other strange omissions from the collection include the absence of the romantic subplot between Dr. Watson and Mary Morstan in SIGN.  The Dr. Watson voiced by Earle Cross is certainly no young man, but neither is he a doddering elderly gentleman, whose designs on a woman half his age could be perceived as inappropriate.  Watson ends the film thinking wistfully upon Mary Morstan's memory, but there are no definitive conclusions as to their future.  “The Sherlock Holmes Animated Collection” is an ideal series of films for Sherlockians who look for comprehensive adaptations of the Sherlock Holmes canon, interpretations that pay attention to details that would please only devoted enthusiasts.  However, these are not films for completists, for admirers who seek a version of STUD that features Holmes and Watson’s first meeting, or what The Ritual called the “Sherlockian Holy Grail”—a definitive version of HOUN.  And it is certainly not the place to find a Sherlock Holmes who burns with an inner fire, and “the fierce energy of his own keen nature” (SCAN).
oOo
“Better Holmes & Gardens” now has its own Facebook page.  Join by “Liking” the page here, and receive all the latest updates, news, and Sherlockian tidbits.

Congratulations to Katie Magnusson, who is the winner of the "Sherlock Holmes on Screen" contest! She will receive copies of the canon on audiobook, as read by the incomparable Edward Hardwicke. Thank you to everyone who entered!
Posted by goddessinsepia at 5:14 AM