"To a great mind, nothing is little," remarked Holmes, sententiously. (STUD)

When beginning any serious endeavor to collect books about Sherlock Holmes, his world and his creator, one is going to need bookshelves. Many, many bookshelves. Sturdy ones, preferably, made of a solid materials and reinforced with some sort of titanium bracket. And as those shelves start to fill up with books about Sherlock Holmes and his relationship with the holy scriptures, Sir Arthur Conan Doyle and British imperialism, and the various incarnations of the Great Detective on stage and screen – there is bound to be some inevitable overlap. And as the collection grows, there is also bound to be some difficulty in locating that precise bit of information that one needs, when one needs it, and one starts to debate the advisability of some sort of card catalog before one descends into utter madness. And while we're at it, why is my cat always sitting on my collection of annotated Sherlock Holmes anthologies when I need them most – it's not as if they could possibly be comfortable?

*cough* Where was I?

Back to my original, and not at all deranged, point of discussion – Kathleen Kaska's new edition of The Sherlock Holmes Triviography and Quiz Book, published earlier this year, is perfectly placed on the shelves of any collector of Sherlockian volumes, newly devoted or earnestly experienced – preferably a shelf that easily accessible, about shoulder-height, perhaps? Because it is the sheer accessibility of the volume that is both its brilliance and its greatest strength. Some collections may profess the same breadth and depth of material, but will boast none of Kathleen Kaska's readability. Originally published in 2000, the quiz book is the same treasure trove of Sherlockian information as many larger volumes, but is infinitely more portable, approachable, and portioned out in easily digestible bits, in the forms of multiple choice, true/false and short answer quizzes (and crossword puzzles, my personal favorite). The trivia spans all manner of Sherlockian subjects from the original 56 short stories and 4 novels, to the life of Sir Arthur Conan Doyle, to the world of Sherlock Holmes on screen.

In the (sometimes seemingly) infinitely expanding world of Sherlockiana, Kaska's book is more than just a collection of trivia. It is a reference work that presents a new dazzling array of information, while offering old and familiar knowledge in a manner that will surprise and delight even the most learned of Sherlockian scholars. The measure of a good reference work is in its ability to teach, but also in its ability to surprise – to keep the reader pursuing, searching, endeavoring to find answers to even the remotest questions. Kathleen Kaska's triviography book takes a little of the legwork out of that search, but none of the joy. It balances both form and function into one indispensable volume.

Ms. Kaska graciously answered a few of my questions about her books, her writing process, and her relationship with Sherlock Holmes. Read her responses below:


You have written three triviography books – on Sherlock Holmes, Alfred Hitchcock, and Agatha Christie. Would you tell us a little bit more about your interest in trivia? Does your career as an educator have any influence?
In the 1990s when I decided to finally write “that” book, I quickly learned that it was much easier to break into the publishing world with nonfiction rather than fiction. Trivia books were becoming popular and I decided to make use of my complete Agatha Christie collection by writing the Agatha Christie trivia book. I reread each and every story and novel. Dissecting and analyzing Christie’s writing turned out to be a valuable tool when I began writing my own mysteries. I can’t say that being an educator had an influence, but it certainly helped when I begin writing all those quiz questions.

I was constantly amazed by what I learned from reading your Sherlockian trivia. Can you share a little bit about your process of research and writing? For example, how did you determine the framework of the book – how it would be structured and why? Were there any interesting bits that didn’t make it into the book?
My research involved reading every story and watching every film these three geniuses created. The framework of my Sherlock Holmes and Alfred Hitchcock trivia books were the same, but different from the Agatha Christie trivia, which has more of a cozy style. In the Hitchcock book, I began most quizzes with behind-the-scenes anecdotes describing Hitchcock’s practical jokes, bizarre antics, and innovated filming techniques. I did the same with the Holmes book, giving readers information on where Conan Doyle got his ideas for each story. What I discovered about Conan Doyle was that he was called in to assist in locating Agatha Christie when she disappeared for eleven days. Instead of using Sherlock’s deductive reasoning, Conan Doyle consulted a medium. The medium’s prediction of when Christie would surface turned out to be right.

I believe most Sherlockians are always looking to expand their libraries. Is there a Sherlock Holmes reference book or other resource that you found critical in creating your own trivia book? Are there any other works that you believe belong in every Sherlockian library?
It seems like new books about Holmes and Conan Doyle hit the shelves every week. The Holmes trivia first edition was published in 2000, and since then I've added several more to my collection. But the two most valuable reference books were Jack Tracy’s The Ultimate Sherlock Holmes Encyclopedia and Matthew E. Bunson’s Encyclopedia Sherlockiana.

What do you think is the most important thing that young, aspiring writers (mystery or otherwise) could learn from the writing of Sir Arthur Conan Doyle and the stories of Sherlock Holmes?
This answer requires its own separate book; there’s so much a young writer can learned from Conan Doyle: creating voice, setting, characters, relationship between characters, and of course, plotting. 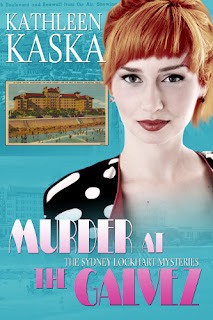 How have Doyle and the Canon influenced your own mystery series, featuring reporter Sydney Lockhart?
Conan Doyle’s stories hooked me and made me a lover of mysteries, however, when I began writing, my biggest influences were the hardboiled detective writers from the early 1900s. I like to think of Sydney as a female Phillip Marlowe.

I understand you read some Sherlockian pastiche. What elements do you think are critical for a well-executed pastiche? Why are some appropriations of Holmes and Watson successful, where others are not?
The voice is the most crucial, followed by setting. I enjoyed Nicholas Meyer’s pastiches, The West End Horror and The Canary Trainer. Another excellent example is a story written by Dan Andriacco entitled The Peculiar Persecution of John Vincent Harden. Andriacco has captured Dr. Watson’s voice and Conan Doyle’s writing style perfectly.

Who was your favorite actor to portray Sherlock Holmes on film, television or stage? Similarly, what elements do you think are necessary to make such adaptations successful?
So many excellent actors have played Holmes: Basil Rathbone, John Barrymore, Peter Cushing, Robert Downey, Jr., Benedict Cumberbatch, but I have to go with Jeremy Brett. The Granada TV series stuck as close to the original stories as possible and Brett’s portrayal of the Great Detective is flawless.

Tell me a little bit about your ideal Sherlock Holmes adaptation. Would it be a canonical story, a pastiche, or a conglomeration? Modern or Victorian? Who would appear in it, and why?
Although I love the new BBC series with Benedict Cumberbatch, which is set in current time, I prefer the canonical stories set in the Victorian era. Whenever I open Conan Doyle’s collection, which I do often, I hear the clacking of hoofs as the horses trot down the streets of London and I smell the dank air as it drifts across the Thames and I’m instantly transported back in time.

You have written three trivia books about well-known figures in the mystery and thriller genre. Do you have any plans for a fourth? And, even hypothetically, who (or what) would be the subject of a fourth book?
I am toying with the idea of focusing on another one of my favorite detective authors or writing trivia about several whom all belonged to the same genre. Who he is and who they are is a secret. But, if you want a hint, you can refer back to my answer in question six.

Finally, what is your favorite Sherlockian quote (something from the Canon, or even from a scholar), and why?
Authors are always asked to summarize their work in one sentence. This quote, without a doubt, summarizes the entire Canon. It’s my overall favorite: “My name is Sherlock Holmes and it’s my business to know what other people don’t.” 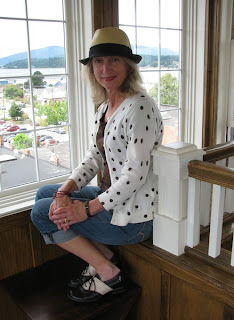 Kathleen also writes the award-winning Sydney Lockhart mysteries set in the 1950s. Her first two books Murder at the Arlington and Murder at the Luther, were selected as bonus-books for the Pulpwood Queen Book Group, the largest book group in the country. The third book in the series, Murder at the Galvez, will be out in December.

Her nonfiction book, The Man Who Saved the Whooping Crane: The Robert Porter Allen Story, (University Press of Florida) was released on September 16 and has been nominated for the George Perkins Marsh award for environmental history.

“Better Holmes & Gardens” has its own Facebook page.  Join by “Liking” the page here, and receive all the latest updates, news, and Sherlockian tidbits.
Posted by goddessinsepia at 6:37 PM 2 comments: