Some Thoughts on Setting: All Roads Lead to Baker Street

"There it was, a sign above a shop that said 221B BAKER STREET. My mouth hung open. I looked around at the ordinary street and the white-painted buildings, looking clean in the morning rain. Where were the fog, the streetlights, the gray atmosphere? The horses pulling carriages, bringing troubled clients to Watson and Holmes? I had to admit I had been impressed with Big Ben and all, but for a kid who had devoured the adventures of Sherlock Holmes, this was really something. I was on Baker Street, driving by the rooms of Holmes and Watson! I sort of wished it were all in black and white and gray, like in the movies." (“Billy Boyle: A World War II Mystery,” James R. Benn)
As most of you are probably aware, “Star Trek: The Next Generation” ran two Sherlock Holmes-themed episodes—“Elementary, Dear Data” and “Ship in a Bottle”—which featured the android Lieutenant Commander Data, and Lieutenant Commander Geordi La Forge, as Holmes and Watson, respectively.  Both episodes pit the pair against a computer replication of Professor Moriarty (played by Daniel Davis), while in a “holodeck” simulation of Victorian London and the world of Sherlock Holmes.

I was largely unfamiliar with Star Trek (and all things related) when I first saw Data and Geordi ensconced in the sitting room of 221B Baker Street.  I will readily admit that I had no idea what a holodeck was, though my husband was more than happy to oblige me in explaining (it’s so rare that our interests collide, after all). My imagination was immediately peaked by the concept, and before I could stop myself, I blurted out, “If I could find a computer program that could recreate Baker Street for me, I would never leave.”  My husband looked equal parts embarrassed, concerned, and affectionately amused.
To be perfectly clear, it’s not that I imagine myself sitting in 221B across from Holmes and Watson, engaged in some kind of clever conversation, as if I could manage it.  Heaven forbid.  Those who know me, and are familiar with my tendency to babble when intimidated, would find the notion both amusing and horrifying.  It’s more to the point that there is something satisfying about a place that does not change, no matter how much time passes.  Of course, it's comforting, but it's also beyond that—it’s about knowledge, a sense of time and place, and a sense of purpose.  It’s like having your own private joke, or well-kept secret, knowing how to get someplace that most other people do not.
Baker Street creates an anchor point for the reader—a beacon in the turbulent harbor of crime and mystery.  In a manner of speaking, people in trouble flock to Baker Street “like birds to a light-house (TWIS).”  Not every story may start there, or end there, but eventually all roads will lead to Baker Street, and when they do, the effect is almost immediately equalizing.

For instance, in the passage above, when Billy Boyle arrives in London, fresh from the United States and officers’ training school, to assist his “Uncle Ike” in the war effort, he is lost and confused, and a little bit heartsick, even if the Boston detective won’t admit it to himself.  But he sees Baker Street, and he is instantly grounded.  He knows this place.  He knows how it has been and how it should be, and most importantly, what it represents, and that is reassuring.  It’s a crucial moment for Lieutenant Boyle, and you can also hear the sound of Billy practically anchoring himself to 221B.  He knows nothing else about London—the city itself is barely recognizable due to the Blitz—but he knows Baker Street.
Ask any Sherlockian, and they will be able to tell you where Holmes keeps his unread mail (under the jackknife, attached to the mantelpiece), where he hides his tobacco (in the Persian slipper), which chair is his (the one to the right of the fireplace), along with countless other details about the architecture of Baker Street.  Detailed replicas of this famous address can be found at the Sherlock Holmes Museum and the Sherlock Holmes Pub, in London.
And it’s those details that fascinate, right?  Basil Rathbone’s wartime-era Baker Street remains Victorian in its interior details, even as the world around him changes violently (as one perceptive reader pointed out a few weeks back).  And Benedict Cumberbatch’s 21st century living room has some distinctly turn-of-the-century touches (the wallpaper and carpets, for instance), while the furniture is most definitely ‘80s (though in this instance I mean more 1980s, than 1880s).  Even Basil, the Great Mouse Detective, had his own personal 221 (and one half) Baker Street (a residence in the cellar of 221B). 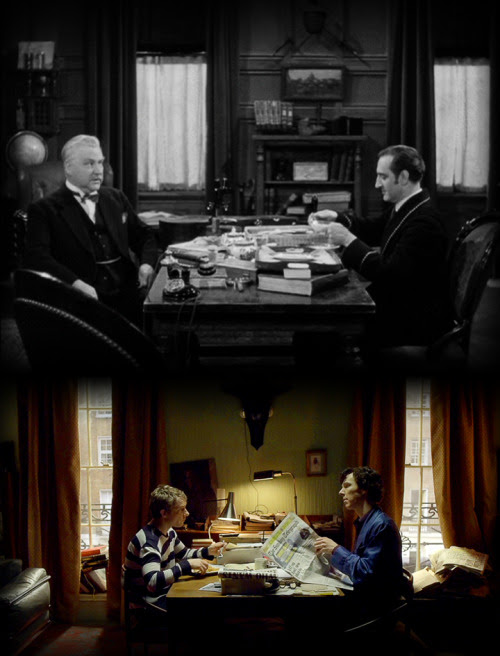 Sherlock Holmes was obviously quite attached to Baker Street, and in “The Dying Detective,” Watson tells us: “…his [rent] payments were princely.  I have no doubt that the house might have been purchased at the price which Holmes paid for his rooms during the years that I was with him.”  Holmes resides almost exclusively at Baker Street (barring a three year hiatus) from 1881 until he retires to Sussex Downs in 1903.  At a certain point, he was a man of, if not unlimited, but at least substantial means.  He could have purchased his own home at any point, but didn’t.  He chose to stay, and rent, a moderately-sized flat.  It’s curious.  It makes you wonder.
﻿
﻿


Baker Street is, for all intents and purposes, an ordinary building on an ordinary street.  But there’s a soul to the place.  221B Baker Street is a character in the stories just like either Holmes or Watson.  We know just as much about it.  From the bullet-scarred walls, to the flight of seventeen steps that lead up to the flat, it has all been as carefully documented and debated as the location of Watson’s war wound.  Potential floor plans have been studied and theorized over in the same way as the possible names of Holmes’s parents (I favor “Siger” and “Violet” for a preference).  If Holmes and Watson are alive, then so is Baker Street.  It lives and breathes as much as anything else in the canon.  Likewise, it can never die.  We need to know that all roads still lead back to Baker Street, even if the scenery changes over the years.
oOo
Need a little mood music?  May I make a suggestion?
Posted by goddessinsepia at 5:53 AM

Email ThisBlogThis!Share to TwitterShare to FacebookShare to Pinterest
Labels: some thoughts on setting