“…a group of people who seemed to be intensely amused by the situation” (BLAN): The Nature of the Sherlockian Gathering

“We’re more than reality, you and I…you, my friend, have made us immortal.” (Clive Merrison, as Sherlock Holmes)
I have my nose nearly pressed up against a display case at the Lilly Library, trying not to breathe clouds of condensation onto the glass.  “That…that…that is just…” I stutter, struggling for words.  “That is just spectacular,” I finally announce to the room at-large, and the few people around me murmur in agreement.  We are all exhibiting a similar posture—trying to get as close to the case as possible, without smearing the glass with fingerprints.
“I know, isn’t it?”  Ginger sidles up beside me, and peers down appreciatively into the case.  “It’s just magnificent.  I wish I could put my hands on it.”
“Far be it from me to interrupt you two,” Darlene mutters from behind us.  “But you do know that there is a copy of the Gutenberg Bible sitting just to your right?  Just turn your head slightly, and you’ll see it.  Right there.  Gutenberg Bible.”
I glance back at her, and then back down again at the original “Elementary, My Dear Data,” script sitting in the case before me.  “My priorities are where I want them to be, thank you.”
“Well, as long as we’re all in agreement,” Darlene says with a smile.  “Now, shove over.  I want to see too.”

The weekend of November 11-13 marked the third incarnation of Wessex Press’s seminal “Gillette to Brett” conference, which highlights the various incarnations of the Great Detective on stage and screen.  Distinguished presenters included: actor Curtis Armstrong, editor and scholar Leslie Klinger, BBC radio producer Bert Coules, and authors Tony Earnshaw, Henry Zecher, and Michael Hoey (son of character actor, Dennis Hoey, who appeared as Inspector Lestrade in the Universal Sherlock Holmes films).  The event was capped off with the 35th anniversary screening of “The Seven-Per-Cent Solution,” with introductory remarks by author and screenwriter Nicholas Meyer.  Presentations were punctuated by film screenings and networking opportunities.  Throughout the conference, at meals and huddled in the Dealer’s Room, conversations centered on the various persons who have had the opportunity to portray Sherlock Holmes and Dr. Watson, and the various types of media in which they been portrayed.

However, the conference’s theme seemed to center around one of Curtis Armstrong’s early remarks: “Anyone can play Hamlet…Keanu Reeves played Hamlet…but Sherlock Holmes requires a gift which is not given to many.”  Because more than anything I learned that weekend in Bloomington, Ind., I learned that studying Sherlock Holmes requires a keenness that is not given to many.  For instance, Henry Zecher’s impressive and monumental biography, William Gillette, America’s Sherlock Holmes, which is nearly 750 pages of exhaustive research and was therefore too large to fit into my carry-on bag, demonstrates a depth and an enthusiasm of subject, which was mirrored in his presentation.  Another point of fervent conversation regarded the various adaptations’ attentiveness and adherence to the minute details of the canon: where Peter Cushing was forced to deviate from his original vision for Hammer Films’ version of “The Hound of the Baskervilles;” and conversely, how Bert Coules worked tirelessly to create the first complete rendering of the canon using the same two actors (Clive Merrison as Sherlock Holmes, and Michael Williams as Dr. Watson).  Furthermore, Michael Hoey’s stories of his time on the Universal Sherlock Holmes set with Basil Rathbone, Nigel Bruce, and his father, have lost none of the childlike wonder and appreciation which he must certainly felt as a young boy, surrounded by such giants of the industry. 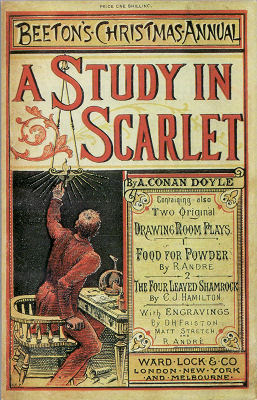 But that, I think, is part of the nature of being a Sherlockian, too.  We do not, and cannot afford to, lose our childlike wonder at the subject that so gripped our hearts as children, as young people, or even as grown adults.  As I sat in the Lilly Library, viewing a presentation of some the collection’s rarer pieces, the gasps and murmurs of appreciation grew louder and more pronounced with each new treasure—a copy of Edgar Allan Poe’s “Tamerlane,” a rare printing of Chaucer’s “Canterbury Tales,” pages from that Gutenberg Bible that had failed to catch my eye earlier, but which were now given to the audience to touch.  But when the librarian presented one of the Lilly Library’s two copies of the 1887 “Beeton’s Christmas Annual,” the intakes of breath took on such a sharp edge that I began to worry that the audience as a whole was going to gasp itself into suffocation.  I wondered briefly if the librarian knew CPR, but lost the thought when he revealed an original print of the Declaration of Independence.

“Education never ends, Watson,” Sherlock Holmes says in “The Red Circle.”  “It is a series of lessons with the greatest for the last.”  And after meeting some of the presenters and authors in attendance at “Gillette to Brett,” I realized just how many Sherlockians hold this axiom close to heart.  I had the opportunity to meet and speak with Dan Andriacco, and Kieran McMullen, two MX Publishing’s authors.  Andriacco is the author of Baker Street Beat, and No Police Like Holmes; McMullen is the author of Watson’s Afghan Adventure and Sherlock Holmes and the Irish Rebels.  And they are both enthusiastic devotees of Sherlock Holmes, as enamored of their chosen subject today, as they were when they first began.  They are always learning, constantly thinking, and most importantly, they want to be a part of the conversation—not just start it.  Sherlockians want to discuss everything from bourbon, to period weaponry, to the finer points of rare pastiches—as long as it all relates back to the root discussion.  The desire to talk about the thing we love, with others who love it, should not fade, but only grow stronger with time.  This is, after all, why conferences such as “Gillette to Brett” exist, and why they continue to exist.  It is also why Sherlockians continue to seek each other out, and hopefully will always do so.
oOo
“Better Holmes & Gardens” now has its own Facebook page.  Join by “Liking” the page here, and receive all the latest updates, news, and Sherlockian tidbits.
Posted by goddessinsepia at 8:11 PM