“Such as children’s toys are kept in” (MUSG): Assorted Sherlock Holmes Trappings and its Role

“And now, Doctor, we’ve done our work, so it’s time we had some play. A sandwich and a cup of coffee, and then off to violin-land, where all is sweetness and delicacy and harmony, and there are no red-headed clients to vex us with their conundrums.” (“The Red-Headed League”)


There’s little else in this world that can motivate my husband and I to clean like an unexpected visitor. It’s not that we’re untidy people per se – it’s just that we have no children, no nearby relatives, and nobody that we feel the need to impress except ourselves. All right, and maybe we’re lazy. But we can summon energy to organize and dust when properly motivated, and recently, when our oldest friends called to let us know they were in the area and stopping by for a visit – my husband’s two-year-old goddaughter in tow – well, consider us properly motivated. And this is how I found myself knee-deep in my Sherlock Holmes collection – dusting, reorganizing, tucking things away, and just generally trying to make it all look as uninteresting as possible from a toddler’s perspective. 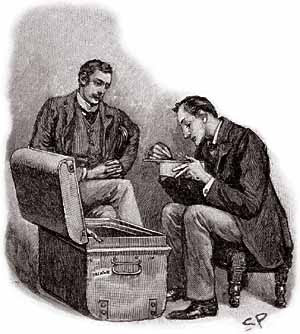 This actually proved a more difficult task than I had imagined. There are books, of course. So very many books. Books on shelves and books in boxes; books neatly catalogued and organized, and books in towering stacks leaning up against walls. Books that I’ve read, books that I mean to read, and books that I plan to read again – if I should ever wake up to find there is another day in the week or an additional five hours in the day. There are also movies – on VHS, DVD and Blu-Ray. There might even be a few on laser disc tucked away somewhere, which I no longer have a way of viewing. There are comic books, and video games, and even a rather lovely magnifying glass for which I can neither figure out a practical daily use nor a practical way of displaying it. There’s a pewter figurine of Sherlock Holmes in an inverness cape and deerstalker hat, which the owner is supposed to paint by hand, but I lack the necessary skillset. There is even a glass bottle of green M&M candies that my husband had personalized with the Sherlock Holmes silhouette for my birthday. I tried to place the more tantalizingly colorful, breakable, and edible items up on high shelves.

But I also found several items that did not fall in any of those categories, strictly speaking. There is the Sherlock Holmes action figure, which I acquired from the online purveyor of a variety of oddities, Archie McPhee, but can also be purchased elsewhere. I use the term “action figure” relatively loosely here. Though the figure is also clad in a plastic inverness cape and deerstalker hat (the hat is removable, the cape is not), he neither moves nor is he particularly pose-able. There are, however, a removable pipe and magnifying glass that come included with the package, which I have kept obsessively sealed. Similarly, there is the set of Sherlock Holmes paper dolls, which remain likewise untouched on their shelf. The set features 60 interchangeable heads of actors who have portrayed Sherlock Holmes and Dr. Watson over the years (including the Will Ferrell/Sacha Baron Cohen venture that never quite came to fruition), as well as 10 different costumes and 4 other companions in addition to Dr. Watson (Professor Moriarty, Inspector Lestrade, Mrs. Hudson and Irene Adler). I even own two copies of the “221B Baker Street: The Master Detective Game.” One copy is still wrapped tightly in its original plastic packaging; the other copy I was convinced to open, and I have actually played, when I can find a willing companion.
But somewhere, between the matchbooks adorned with the famous Sherlockian silhouette and the Sherlock Holmes bookplates that I will never paste into books and the vintage metal bookmark in the shape of the Great Detective that’s really a little too tarnished to be considered a collectible anymore – I suddenly found myself wondering: “Why do I own this stuff, precisely?”
That’s not to say that I’m not glad that I do – own these things, that is. The first time I ever walked into the dealers’ room at my very first Sherlockian event, I think I must have had some sort of fit. I don’t remember much personally but to hear it told I just started pitching money at people in exchange for whatever I could find. My collection is not unique. It is not even particularly large in the grand scheme of Sherlockian collecting. And collections are a universal theme of most hobbies – see the “Doctor Who” fan with his own TARDIS in his living room, the “Trekkie” who built his own tricorder, or the “Star Wars” aficionado with her own wearable Stormtrooper armor. Many people seem to come equipped with that internal “collector’s alarm” that responds to one particular type of item, and when it goes off, causes the bearer lose all perspective – financial or otherwise.

Collecting makes the whole endeavor seem more tangible – gives the whole exercise substance. It’s certainly not that we’re looking for validation – no one is looking for or even requires permission – and it’s not as if owning a plastic replica of a Calabash pipe and a 1000-piece jigsaw puzzle that reveals the plot to “The Speckled Band” when assembled will provide that validation anyway. But there are only 56 short stories and 4 novels in the original Sherlock Holmes canon, as penned by Sir Arthur Conan Doyle. Collecting helps to expand the universe – extend it beyond its original boundaries. Owning these items is a reminder that there are no limitations – not really. Every book, movie, soundtrack album, and replica deerstalker only serves to contribute to the vastness of the enterprise.
The challenge, of course, will always be finding the space and the time. But as Sherlock Holmes once said, "Now, Watson…we have half an hour to ourselves. Let us make good use of it.” (The Sign of Four)
oOo
“Better Holmes & Gardens” now has its own Facebook page.  Join by “Liking” the page here, and receive all the latest updates, news, and Sherlockian tidbits.
Posted by goddessinsepia at 11:23 AM