“The Meaning of This Extraordinary Performance” (COPP): Granada Television’s “The Hound of the Baskervilles”

Having discovered that the mysterious man on the Tor—whom he had glimpsed briefly one dark evening with Sir Henry Baskerville—is none other than his good friend Sherlock Holmes, Dr. Watson follows the Detective into the rough stone hut that has served as Holmes’s dwelling for the past few days.  Holmes serves Watson some of his “meager refreshment”—a repulsive, lumpy, brown soup—that Holmes pours proudly and sloppily onto a plate, before encouraging Watson to eat.  The Doctor looks revolted, and tries to distract Holmes with a few moments of conversation about the case before them.  Eventually Holmes tries again: “Watson, please, do try my stew.”
Cornered, Watson sighs: “It’s quite disgusting, Holmes.”
“Yes,” Holmes sighs in return.  “Yes, it is.  Well, it’s better when it’s hot.” 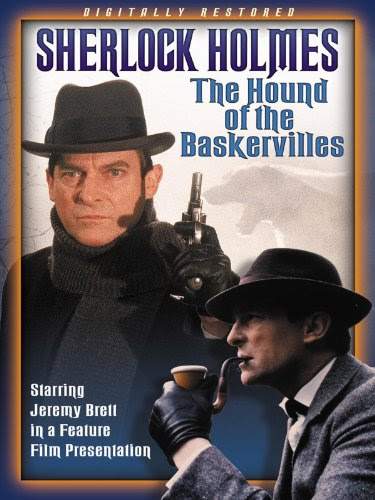 That statement can be used to neatly sum-up Granada Television’s version of The Hound of the Baskervilles.  In other words, it’s not so much about what is inside the package, as it is about the presentation.  With HOUN, it’s not about the story itself—there are few people who do not know at least something about the horrible hound, the menacing moors, and the terrible family curse.  As The Stage said, “Like a child who likes to read the same Pooh story time and time again, it’s not so much the narrative that you love as the manner of its telling” (Davies 145).  With the 1988 adaptation of HOUN, what is central is the issue of conveyance, not concept.
Granada’s HOUN actually has quite a bit to recommend itself, beginning with the fact that this version of HOUN actually features a young man (Alastair Duncan) in the role of Dr. James Mortimer, as opposed to the elderly medical man as which he is so often portrayed.  Duncan is certainly more in keeping with the Detective’s famous description of the doctor: “…a young fellow under thirty, amiable, unambitious, absent-minded, and the possessor of a favourite dog, which I should describe roughly as being larger than a terrier and smaller than a mastiff.”  Although Duncan’s Mortimer cannot be described as completely “unambitious,” as perhaps he is “selectively ambitious.”  Dr. Mortimer seems more than willing—even pleased—to accompany Holmes and Watson as they capture Jack Stapleton at the film’s climax.  He even hunts the rabbits that have been destroying his excavation site with lively—if somewhat gruesome—energy.
Kristoffer Tabori fills the role of Sir Henry Baskerville—a character that the late Richard Valley described as somewhat thankless: “Sir Henry’s primary plot functions are to fall in love with the wrong woman and act as bait for a hungry dog…”  It certainly cannot be argued that the baronet does—and more importantly, must do—both of these things; but he is, as I have discussed at-length elsewhere, more than just fodder for the hound.  Tabori’s performance is subtle, almost to the point of being dramatically understated, and nowhere is that more evident than in Sir Henry’s interactions with Beryl Stapleton (Fiona Gillies).  Tabori’s Sir Henry is neither infatuated nor foolishly love-struck; he does not fawn over “Miss” Stapleton.  Instead, he rather seems quietly in awe of her, as if moved to softness and gentility when in her presence.  As Valley describes Sir Henry and Beryl’s final moment on-screen together: “…[Tabori] contributes a fine, ambiguous moment when, surviving the hound’s dinner arrangements, he comes face to face with the one who has simultaneously betrayed and tried to save him.”

But Granada’s adaptation is not just about the supporting characters, of course.  I don’t typically recommend The Hound of the Baskervilles to friends who have never read a Sherlock Holmes story before; this is mostly because they are always surprised to find how little Sherlock Holmes is actually in this story, for all that it is probably his most famous adventure.  Granada’s version reflects this element of the original text in that Jeremy Brett is only on-screen for a total of about thirty minutes throughout the entire film.  (In fact, some of his scenes are not even new footage, but instead are shots that some viewers may recognize as having been lifted directly from Granada’s version of “The Greek Interpreter.”)  HOUN is really Dr. Watson’s tale.
Edward Hardwicke plays a Watson that the viewer can easily commit to following around Dartmoor, but more importantly, a Watson that we want to follow as he investigates.  According to Valley:
“Hardwicke embodies the two most important qualities of Watson in ‘The Hound of the Baskervilles’: he’s a man with whom we’re willing to linger while the more dynamic Holmes is not on and; second, he’s of sufficient grit and intelligence not to make us think Holmes has lost his mind by sending Watson to Dartmoor in his stead.”
Hardwicke’s Watson seems a bit flabbergasted, but not truly put-out, when Holmes volunteers the Doctor’s services to Sir Henry at Baskerville Hall.  It’s as if he knows his friend well enough that he was expecting something like this.  And when the two men are reunited outside out the stone hut, and Watson learns that Holmes has been following him all the while, the Doctor’s reprimand is gently chiding, not irate: “I deserve better at your hands, Holmes.  You use me and do not trust me.”  It’s easy to imagine Sherlock Holmes as genuinely remorseful in the face of such a gentle reproof.  Their interactions do not degenerate into childish, angry bickering.  And Hardwicke’s Watson certainly does not bumble around foolishly and make silly proclamations to old beggars who are clearly the Detective in disguise (“I am Sherlock Holmes!”).  Holmes and Watson’s relationship is not at question in this version of HOUN; their friendship is solid and stable.  Hardwicke’s Watson trusts Brett’s Holmes implicitly, and Brett’s Holmes is justifiably reliant on Hardwicke’s Watson.
In an interview the year of his death, Jeremy Brett was asked if he wanted to redo any of the Sherlock Holmes stories that he had already had a chance to film.  Without hesitation, Brett stated that he would love to have another shot at The Hound of the Baskervilles.  The script drifted, he felt, and Holmes was away for much too long (Davies 144).  While not an unfair assessment, it also undermines Brett’s own contributions to the production.  Brett plays the Sherlock Holmes of this film a bit ambiguously, as if the Detective is himself unsure of the hound’s true nature.  At one point, Watson asks Holmes, “Then you yourself are inclined towards a supernatural explanation?”  Holmes does not answer the question, and instead sighs heavily and suggests that they send word to Dr. Mortimer.  As Brett himself said: “Now as a man of logic, that’s an enormous jump, but he is so disturbed by how disturbed Mortimer is—a doctor and a man of science—that he considers there may be something…” (144).
According to The Ritual, a theatrical magazine, “The definitive version of The Hound is sort of a Sherlockian Holy Grail.  Granada’s production is one of the best—but it is far from definitive.”  There’s quite a bit in this adaptation that the viewer does not typically see in other versions of HOUN:  a young Dr. Mortimer, a Sir Henry with substance, a compelling Watson, and a superstitious Holmes.  But as the star himself admitted, the film is often laborious and slow, and much of the dramatic tension seems to escape with every overly-long shot of landscape.  The Ritual is probably correct in that Granada’s adaptation is not the “Holy Grail” of The Hound of the Baskervilles films.  But it has many of the essential elements, which other versions usually lack, and perhaps it can still be used as a beacon, to prevent other versions of HOUN from being lost on the moors.
oOo
Only one day left to enter the blog contest!  Share your ideal Sherlock Holmes story, and win a prize package of pastiches.  The contest is open until 11:59p.m. EDT on July 23.
Sources:
• Stuart Davies, David. Starring Sherlock Holmes: A Century of the Master Detective on Screen (January 2006).
Posted by goddessinsepia at 5:27 AM