“The Meaning of This Extraordinary Performance” (COPP): Granada Television’s “The Greek Interpreter”

Sherlock Holmes describes his older brother, Mycroft, as a “curiosity.”  I’ve always liked that term; it implies something that’s meant to be studied.  A “curiosity” should be put up on a shelf, examined thoroughly under glass, picked over with tweezers, and dusted compulsively.  A curiosity bestows knowledge begrudgingly, only after much effort on behalf of the investigator.  Its secrets are kept close to its chest, impermeable and unreadable to all but a select few.  Such is the case with Mycroft Holmes, whose very existence Sherlock neglected to mention to Dr. Watson for the first seven years of their friendship.  But in Granada Television’s adaptation of “The Greek Interpreter,” the relationship and interactions between Sherlock Holmes and his older brother reveal layers of personality and depth of character that a simple reading of the original text leave open to interpretation.

As I’ve mentioned elsewhere, Mycroft Holmes makes two appearances in the canon stories—“The Greek Interpreter,” and “The Bruce-Partington Plans”—and is mentioned in two others—“The Final Problem” and “The Empty House.”  In the Granada Television series, Mycroft Holmes was played by Charles Gray, famous for his roles as the James Bond villain “Ernst Stavro Blofeld,” in Diamonds Are Forever, and as “The Criminologist” (the narrator), in the film version of The Rocky Horror Picture Show.  Gray was cast in the Granada series due, in part, to his role as Mycroft in the 1976 film adaptation of The Seven-Per-Cent Solution (based on the novel by Nicholas Meyer), starring opposite Nicol Williamson as Sherlock Holmes, and Robert Duvall as Dr. Watson.
Gray’s Mycroft Holmes made four appearances throughout the series—first in the canonical episodes, “The Greek Interpreter,” and “The Bruce-Partington Plans,” but then later making special appearances in “The Mazarin Stone” (when Mycroft filled in for Sherlock’s role, due to Jeremy Brett’s illness), and then in “The Golden Pince-Nez” (filling in for Edward Hardwicke, who was filming a movie).  Gray’s interpretation of the elder Holmes brother is at turns jovial and pensive, but in his first appearance in “The Greek Interpreter” seemed far older than the mere seven years that are supposed to separate him from his younger sibling—an effect that was lessened as the series went on.  He seems eternally amused and flabbergasted by Sherlock—much in the way of most older siblings—but also pleased with his abilities, saying with an affectionate turn of his lip and shake of his head—“Sherlock has all the energy in the family”—in response to a list of suggested tactics from his brother. 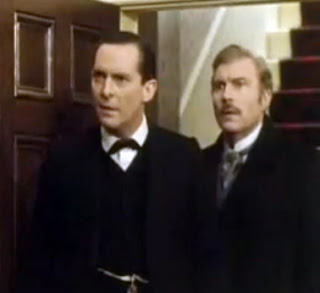 Jeremy Brett’s Sherlock seems likewise amused and flabbergasted by Mycroft, but his reactions are more subtle, often flitting across the screen like an errant firefly.  According to Richard Valley, the late proprietor of ScarletStreet.com, “The underlying affection between the Holmes boys, rarely displayed in earlier interpretations, is largely revealed through Jeremy Brett’s subtle facial expressions as young Sherlock.  As always with Brett, the personality of his Great Detective holds at least as much interest as the mystery itself.”  Indeed, Brett’s facial expressions are as much a clue as any physical evidence.  Upon first seeing his brother perched on a stool in front of the window in the Stranger’s Room of the Diogenes Club, Sherlock looks, at first, awestruck, then suddenly embarrassed, when he realizes that Dr. Watson will have to bear witness to the brothers’ game of deduction.  Later, he looks as shocked and disbelieving to find Mycroft lounging in the Baker Street sitting room as if he had encountered Father Christmas there instead.
And then finally, when Sherlock makes an unkind (if not inaccurate) assessment of Sophy Kratides, and Mycroft says, “You still retain your low opinion of women,” Sherlock’s head snaps back.  His eyes are narrowed and brows are raised.  His lips are pursed.  Mycroft has apparently strayed too closely into a realm of information best kept between brothers. 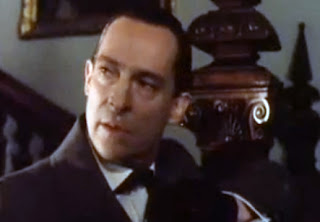 Gray’s Mycroft Holmes is also a bit more involved in this televised adaptation than in the original text—thanks to an added subplot where Sherlock, Watson, and Mycroft chase down the villains while aboard a train.  The trio arrives at the rail platform, just as the train is beginning to pull away.  Sherlock and the Doctor race deftly after it, but the larger Mycroft slips behinds and yells, “I’m not built for running, Sherlock!”  This leaves Sherlock in the position of physically pushing his brother onto the moving train, while Watson pulls him from his position onboard, and Mycroft gives a cartoonish cry.
The decision to bring Mycroft along is an interesting one, for a number of reasons.  First of all, Mycroft, a man who “has no ambition and no energy,” seems a rather unlikely candidate for voluntary participation in an active criminal pursuit such as the one that develops at the end of Granada’s version of GREE.  His presence suggests that Sherlock believes his older brother would be needed or even necessary (perhaps for his diplomatic or government connections) at the close of the case.  Sherlock even goes to great lengths to make sure that his brother has boarded the train, when he probably would have left anyone else behind on the platform.  Certainly, it’s not too much of a stretch to imagine Sherlock Holmes leaving a dawdling and wheezing member of Scotland Yard behind, while waving patronizingly as the train pulls away.
But then, after going to such trouble make sure his brother was on-hand, Sherlock leaves his “sleeping” brother behind as he goes to locate his quarry’s compartment.  “No,” he says to Watson.  “Don’t wake him.  There’s danger enough for the two of us.”  Of course, Mycroft is not sleeping, and his eyes slowly open as his companions leave the compartment.  As Sherlock and Watson corner Harold Latimer and Sophy Kratides in their quarters, the audience watches as Mycroft dines companionably with the third villain, Wilson Kemp, the dining car.  There’s a moment of confusion, where the audience might wonder what Mycroft is up to or if he even knows who he is sharing wine with, but all is revealed when Mycroft arrives at the perfect moment to save his brother and the Doctor, pulling out the weapon that he had deftly lifted from Kemp’s pocket without his knowledge.  Sherlock, for his part, looks pleased, proud, and not at all surprised to see his older brother save the day.
As the episode closes, Sherlock Holmes watches with distaste as Sophy Kratides is lead away.  “It is not a crime to have a cold heart and not a single shred of compassion,” he says, before turning sharply, and walking away—alone—into the fog.  If the intention was to create a silence of isolation, reinforce the idea of Sherlock Holmes as a unique and unmatched phenomenon, then this adaptation of “The Greek Interpreter” was probably the wrong place to do so.  What this episode effectively demonstrates is that, far from being a remote, untethered being, Sherlock Holmes has several moorings that keep him in place.  His brother is one of them, though Sherlock may have kept Mycroft’s existence close to his chest.  But like any remarkable curiosity, Mycroft Holmes has a lot to tell the persistent Sherlockian devotee, and Granada’s interpretation of GREE is just one example of how much he might have to say. 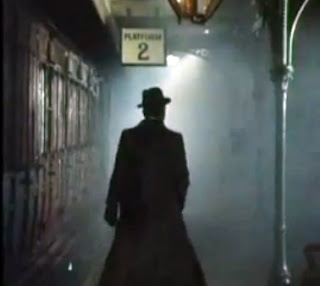 oOo
One day left to enter the Sherlock Holmes trivia contest!  You have until 11:59p.m. EST, on Saturday, May 21, to submit your answers and qualify to win a prize package of Sherlock Holmes reference works.  The winner will be announced on Monday, May 23.
Posted by goddessinsepia at 5:30 AM